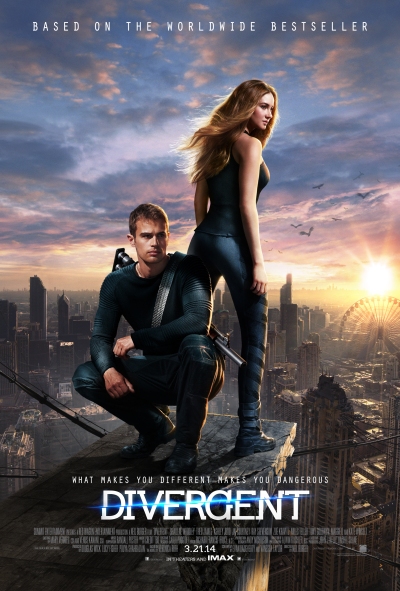 DIVERGENT is a thrilling action-adventure film set in a world where people are divided into distinct factions based on human virtues. Tris Prior (Shailene Woodley) is warned she is Divergent and will never fit into any one group. When she discovers a conspiracy by a faction leader (Kate Winslet)to destroy all Divergents, Tris must learn to trust in the mysterious Four (Theo James) and together they must find out what makes being Divergent so dangerous before it’s too late. Based on the best-selling book series by Veronica Roth.

I saw Divergent in theaters twice the first weekend it released and loved it! My book club friends and I went to the first showing. The release date was March 21st, but there was an 8pm showing the night before. It was so fun to go with my girl friends. Then I went that weekend on a date with my husband since he’s read all the books too.

When watching movies made from books I go with the mindset of seeing the characters I love come to life. I don’t get too worked up about ways the movie deviates from the book. But with that being said, Divergent stayed very true to the book and especially the characters which I appreciate as a book lover.

Veronica Roth made a brief appearance. It was fun to recognize her and think, “hey, I know her!” Shailene Woodley made the perfect Tris. When I saw the previews I wasn’t sold at first, but after seeing the movie I couldn’t imagine anyone else playing Tris. From the first time I saw Theo James in the trailers I thought he was perfect to play Four. Wow. He was perfect. I think he now has millions of teenage girl fans . . . any age female fan actually. 😉

I’m sorry this is such a late post, but if Divergent is still showing in your area go see it! If you loved the book you’ll love the movie.

BOOKS BY VERONICA ROTH
As an Amazon Affiliate I receive a small portion of sales when you click then make a purchase from Amazon links on my blog.