Title: The Convenient Bride
Author: Teresa McCarthy
Publisher: Signet Regency Romance
Release Date: September 2005
Pages: 224
Series: Clearbrook Regency #3
4 Stars: I Really Liked It
Lord Clayton Clearbrook discovers that he needs to marry quickly in order to secure his inheritance, so he sets his sights on Miss Briana Garland, a bluestocking with a brain most men would envy. Briana has secretly admired the handsome nobleman since she was a child, but because of her past, she is wary of trusting in love. Besides, she has her own plans and they do not include a husband! Yet when the couple is hurled into the middle of an assassination plot involving the Prince Regent, they soon discover that love may be the most important weapon of all…
add to your GoodReads

My Thoughts:
The first book was the story of Emily, the only girl with 4 older brothers. Next was the story of the youngest brother Stephen. Now this book tells the story of Clayton the 3rd of the 4 brothers. At the beginning the story flashes back to six years earlier when Bree was 16 and Clayton was 20 and she had a major crush on him even though he didn’t seem to notice his little sister’s friend. It was a fun way to start the story. A lot had happened over those six years, mostly because of the war. I loved the relationship shown between the siblings. I was able to see more of Emily and Stephen’s stories.

I think Clay was my favorite brother to read about. Bree was great too. I definitely rolled my eyes at their . . . idiot-ness though. They were clueless to the other’s feelings for them because of their own pride and insecurities. This third book followed the same order of things from the first two books, but I didn’t mind. It was such a joy to read!

Another wonderful and clean historical romance!

Content Ratings: highlight between ( ) to view details
Sexual Content: mild ( kissing, mentioned they had sex after marriage but no details )
Language: mild ( h***-18, a**-1 )
Violence: mild ( carriage accident with some injuries, suicide death )

I received the ebook from Teresa McCarthy. Thank you! I am not paid for my reviews. My reviews are solely my opinion.

Other Books By Teresa McCarthy

Title: The Wagered Bride
Author: Teresa McCarthy
Publisher: Signet Regency Romance
Release Date: December 2004
Pages: 224
Series: Clearbrook Regency #2
4 Stars: I Really Liked It
Lord Stephen Clearbrook knows one way to clear his gambling debts with a wealthy businessman-by marrying his daughter. But Elizabeth Shelby wants nothing to do with this business arrangement, until she realizes that love may be in the cards after all.
add to your GoodReads

My Thoughts:
Don’t you just love these covers?! Gorgeous. It was so relaxing and entertaining to read a beautiful and clean historical romance. I’m a sucker for historical romance! I dream of going to a ball with my husband where I can dress in a gorgeous ball gown and we can learn the old dances.

The first book told the story of Emily, the sister to four big brothers. This one was the story of the youngest brother Stephen, 24 years old. Stephen had a bit of a gambling problem. When a wealthy businessman had him cornered he was forced to become engaged to the man’s daughter. The story had some funny parts and some really frustrating parts! It was great! It was told from both Stephen and Elizabeth’s point of view. Elizabeth’s younger sister was so funny. She reminded me of the youngest sister in Little Women, so dramatic.

Another very entertaining book in the Clearbrooks series. If you love historical romances you’ll really enjoy this book!

I received the ebook from Teresa McCarthy. Thank you! I am not paid for my reviews. My reviews are solely my opinion.

Other Books By Teresa McCarthy 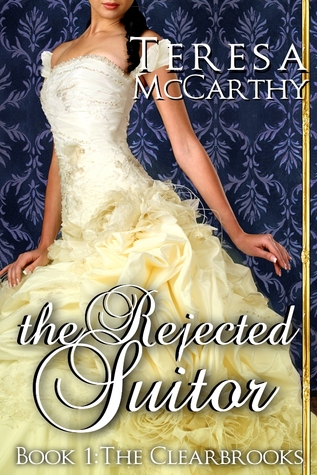 A tale of love and intrigue during the era of Jane Austen and Napoleon Bonaparte.

Lady Emily Clearbrook secretly loved Jared, the Earl of Stonebridge, but one day, he left her without a word. Now, years later, Emily’s four brawny brothers have decided she needs to marry. With no idea about Emily’s past love, the Clearbrook brothers ask their friend, Lord Stonebridge, to guard Lady Emily from unfit suitors until they find her a proper husband. With his dangerous past, the last thing Stonebridge needs is to be watchdog to Lady Emily. But he certainly cannot tell her brothers that the person Emily needs the most protection from is himself!

I love a wonderfully clean historical romance! This book (and whole series) was so pleasant to read. I liked Emily (the Main Character) from the very beginning with her independence and feisty-ness. She was 20, and her 4 older brothers wanted to choose a husband for her so she wouldn’t end up with a gambler or womanizer. Her brothers were so funny. They seriously thought they should and could control Emily.

The brothers sent Lord Stonebridge to watch her while they looked for her a ‘suitable’ husband. Little did they know that Lord Stonebridge and Emily had a past together. Woo! This book had some swoon worthy moments. Oh sigh.

I really enjoyed The Rejected Suitor, full of romance, tension, and even some mystery. I recommend this to anyone who loves a clean historical romance.

I received this book from Teresa McCarthy. I am not paid for my reviews. My reviews are solely my opinion.

BOOKS BY TERESA MCCARTHY
As an Amazon Affiliate I receive a small portion of sales when you click then make a purchase from Amazon links on my blog.