Cinder, a gifted mechanic, is a cyborg. She’s a second-class citizen with a mysterious past, reviled by her stepmother and blamed for her stepsister’s illness. But when her life becomes intertwined with the handsome Prince Kai’s, she suddenly finds herself at the center of an intergalactic struggle, and a forbidden attraction. Caught between duty and freedom, loyalty and betrayal, she must uncover secrets about her past in order to protect her world’s future.

My Thoughts:
I’ve wanted to read this book for months! The cover rocks. I finally got the chance, and it was amazing. I loved this book!! 5 Stars! Warning: I almost gave it 4 stars because I was so mad that the ending left me hanging so badly, but once I calmed down I realized I loved the read so much it deserved 5 stars. I’m dying to read the next book! I haven’t been this into a series in awhile.

I don’t read sci-fi so I didn’t know what to expect. I wasn’t expecting it to be a new favorite that’s for sure.

I loved the world of New Beijing. It was intense and heart breaking. The plague was terrifying and hopeless. Cinder was a cyborg which meant she was human but had machine parts added by scientists after an accident of some kind. The human citizens looked down on the cyborgs. Some felt they should have died in whatever accident made them need cyborg parts. They felt it was unnatural and basically were scared of them. Cinder lived in fear that people would discover she was cyborg. Her “family” hated her for it.

Cinder’s best friend was her droid Iko, a robot. Iko was unique with her personality. I loved it! She had a crush on the Prince. My favorite quote by Iko was after meeting the Prince. “Prince Kai! Check my fan, I think I’m overheating.” (pg. 14) Prince Kai was great! I think I’ll stop here so I don’t give away any of the amazing twists and turns throughout the book.

Cinder took me on an amazing ride. I laughed. I cried. I screamed. I sighed. It was wonderful.

Marissa Meyer will be at the Austin Teen Book Festival on September 29th. I can’t wait!

This is book #1 in my preparation for the Austin Teen Book Festival!

This is book #4 of my 2012 Debut Author Challenge, hosted by The Story Siren. 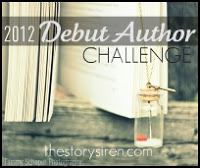 Title: Spell Check
Author: Ariella Moon
Publisher: Astraea Press
Release Date: January 2012
Pages: eBook only
Series: none
Source: publisher
4 Stars: I Really Liked It
Ever since Evie’s photojournalist dad died, paralyzing fear prevents her from picking up a camera. If Evie can’t pull it together, she’ll lose her position as Yearbook Photo Editor and suffer academic failure. Even worse, Evie risks losing Jordan, her secret crush. Despite a falling out, Evie never forgot Jordan. Now they are lab partners and the chemistry definitely sparks between them. But Evie’s supposed friend, Parvani, wants Jordan for herself. Parvani possesses a brimstone-hissing spell book. Soon the moon will be in the optimum phase for a binding love spell. To save Jordan, Evie must join forces with Salem, the school Goth. The clock is ticking. Can Evie get her mojo back in time to check this spell?
add to your GoodReads

My Thoughts:
This book was really fun! The spell stuff was a little weird for me since they were in a regular high school. It wasn’t like it was a fantasy world. But even with my dislike of the love potion idea I still really liked this book. It had a lot more depth to it than I expected.

Evie was a freshman and Parvani was her best friend who had a crush on Jordan, Evie’s childhood friend. I liked that Evie and Jordan had a history. They played together as little kids and had a ton of memories of going to theme parks and playing at each other’s houses, too cute. Then they had a fall out in junior high, definitely relatable. Most of us probably had elementary school friends we weren’t friends with by high school. Parvani was a little naive and a freshman so she thought she should give Jordan a love potion. Evie didn’t always make the best choices, but hey she was young and allowed to make silly mistakes especially while grieving the death of her father.


My favorite scenes were during the capture the flag games, so fun. It brought back a bunch of memories for me. One thing that drove me crazy throughout the book was that Jordan said “like” too much. It was easily ignored though.


I highly recommend this enjoyable book! If you’re in the mood for a fun, young high school book with a little spell action go check it out.

*I received a copy of the eBook from Astraea Press. Thank you! I am not paid for my reviews. My reviews are solely my opinion.*
Buy it!
[ Amazon

This is book #3 of my 2012 Debut Author Challenge, hosted by The Story Siren.

Title: Falling
Author: L.C. Smith
Publisher: L.C. Smith
Release Date: January 2012
Pages: eBook only
Series: none
Source: author
3 Stars: I liked it
Love is a funny thing; there’s the kind that’s like you’re five and you’re looking up at your Mum’s face as she reads you a bedtime story.
Then there’s the kind that makes you nervous and twists in your stomach.
Then there’s the kind that makes you feel like you’re holding everything of worth in your hands.
After the death of her parents in a car accident when Reid was eleven years old she gained the ability to jump into peoples bodies. Not a single person knows her secret, not her only friend Sara and especially not Keller. The problem is, every time she looks into his eyes, she starts falling into him.
add to your GoodReads

My Thoughts:
Falling was a good read. The whole idea of falling or jumping into someone’s body was so unique and interesting to me. I kept reading to find out how Reid would deal with this really strange ability.

Reid, an orphan from age 11, was a senior at an all girl boarding school. I didn’t know how to feel about her sometimes. I liked her, but then I couldn’t relate to some of her choices which made me frustrated and unconnected to her. Like when Reid would choose to jump into someone’s body, instead of forced by her power. I couldn’t fathom why she would choose to invade someone’s privacy like that. Sometimes it was funny or interesting, but other times it bothered me. I also felt the writing was a bit confusing at times and had to go back and re-read something to follow what was happening.

Reid’s best friend Sara was fun; I wish there was a little more of her. I really liked Keller, the boy interest. The chemistry between Reid and Keller was great. I really enjoyed their scenes together. They were super cute! The ending was great and made everything all better. I liked Reid at the end and was glad to see her develop as a character.

*I received an eBook review copy of the book from the author. Thank you! I am not paid for my reviews. My reviews are solely my opinion.*
Buy it!
[ Amazon

This is book #2 of my 2012 Debut Author Challenge, hosted by The Story Siren.

Title: First Date
Author: Krista McGee
Publisher: Thomas Nelson Publishers
Release Date: January 2012
Pages: 336
Series: none
4 STARS: I Really Liked It
Addy Davidson discovers God’s unexpected plans for her life when a reality TV show turns her quiet existence on its head.
The orphaned daughter of missionaries, Addy is quite content to stay in the shadows and never draw attention to herself. But when she’s selected for a reality TV show to try to become the President son’s prom date-a show she didn’t audition for-she’s suddenly in America’s spotlight.
The lights, the make-up, the competitions, and the blogs discussing every move she makes all make Addy incredibly uncomfortable. But through her time at The Mansion, Addy comes to realize that first impressions aren’t always right, that hiding out may not be what God had planned for her life, and that her faith should affect everything she does. It may just be that her selection wasn’t random at all and that she’s on this show “for such a time as this.”
add to your GoodReads

My Thoughts:
FYI: This is a Christian contemporary fiction. I know some people like to know that upfront.

I really enjoyed this book. It was fun and light. I liked the characters and wanted to see how it would all turn out. Addy wasn’t exactly happy to be on a reality tv show to win a date with the President’s son. This wasn’t just any date though; it was a date to Jonathan’s senior prom! The story line was so fun. The realty show started off with 100 girls from all over the nation, and basically Addy was the only one not excited and falling all over the first son. The villain in the story was great. He was annoying, mean, bitter, and laughable all at the same time.

I was a tad disappointed at the very end of the book. It’s probably silly of me though. If you don’t mind a small spoiler highlight between the ( ). ( I wanted Addy and Jonathan to kiss!! I would have been happy with just one. ) Okay I’m glad I got that off my chest. : )

This story is about friendship and overcoming your fears, and I enjoyed taking the journey with Addy.

This is book #1 of my 2012 Debut Author Challenge, hosted by The Story Siren.